Mace’s Towing of Memphis, Tenn., was called by the Memphis Police Department to respond to an accident on 1-40 westbound. A tractor-trailer loaded with 80-lb. bags of Portland cement weighing approximately 40,000 lbs. was involved in an accident as it swerved to miss a stalled vehicle. After crashing through a guardrail, the tractor-trailer plummeted down a 60-foot embankment, leaving only the trailer tandems on the roadway.

When Mace’s arrived on the scene they found that the tractor-trailer was completely down the embankment and all of the cargo had shifted to the front of the trailer. The angle made unloading impossible. At that point, Mike Mace of Mace’s Towing decided to perform a slingshot maneuver.

Mace’s 2009 Kenworth T800 with a Vulcan V-70 and 2000 Peterbilt 378 with a Vulcan V-70 set up to perform the maneuver. As they attempted the slingshot, they experienced quite a bit of drag because of the angle in which the tractor-trailer was positioned and the landing gear was digging into the roadway due to the resistance of the tractor. After setting up their wreckers and making this discovery, Mace’s called James Jones with Visual Towing of Memphis, Tenn., to assist with the recovery. 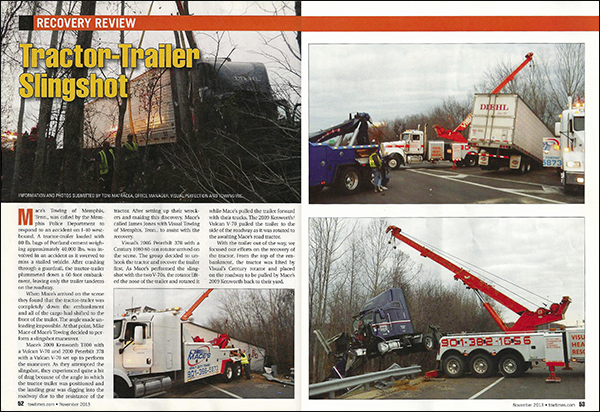 Visual’s 2005 Peterbilt 378 with a Century 1060 60-ton rotator arrived on the scene. The group decided to unhook the tractor and recover the trailer first.

As Mace’s performed the slingshot with the two V-70s, the rotator lifted the nose of the trailer and rotated it while Mace’s pulled the trailer forward with their trucks. The 2009 Kenworth/ Vulcan V-70 pulled the trailer to the side of the roadway as it was rotated to the awaiting Mace’s road tractor.

With the trailer out of the way, we focused our efforts on the recovery of the tractor. From the top of the embankment, the tractor was lifted by Visual’s Century rotator and placed on the roadway to be pulled by Mace’s 2009 Kenworth back to their yard.